I’m having an amazing week this week, I’ve won something each day which I haven’t done for a long time so I’ve decided to give something back in thanks.

I’m going to give away one of the prizes I have won this week. To win all you have to do is to make a comment on my journal (not this blog) by Sunday evening. The comment has to relate to the post its on and has to be more than just “hello”

I’ve got 10 posts on there right now and am adding more all the time, well, as often as I can anyway so hopefully anyone who wants to enter can find something to say.

I’ll draw the winner by using a random generator, you can enter more than once by commenting on more posts but only one comment per post per person will be counted

I think thats everything, I’ll let the winner know on monday and they’ll get their surprise prize next week 😀

Thank you to everyone who took part, the winner has now been announced here 🙂

Back in May I was very lucky and won a spa weekend with More magazine on Facebook which was sponsored by Gillette Venus Spa Breeze 2-in-1 razor. With the summer coming and things going on it took till now to have time to arrange a weekend we could spend away. The prize was for 2 nights bed and breakfast with spa treatments for 2 people at the Four Seasons Hampshire. After doing some research into the prize I had won I admit I became somewhat intimidated by it and was very self concious about going but I really should not have worried. The staff are excellent and very well trained in their jobs, they are welcoming and courteous at all times and they make it seem like nothing is too much trouble.

When we arrived we parked in the guest carpark and walked round to reception to take in the amazing views offered and to really have a look at this magnificent building. As we entered the main doors we were shown to the reception desk where our details were taken and door keycards and a schedule for the spa the next day were issued to us. We were then shown up to our room and given a brief set of directions and introduction to the facilities available to us. The room we were shown to was not one I was expecting, I hadn’t asked when it was being arranged for me which type of room would be booked, I assumed it would be one of the Mews rooms which seemed to be the basic room available but the room we were lead to was in the Manor House itself and it was beautiful as you will see for yourself from the pictures below. Upon entering the door to the room you find yourself in a plain vestibule with wardrobes built in to the right wall (these contain complimentary slippers alongside the hotel room staples of an iron and ironing board) the bathroom directly ahead and the entrance to the bedroom to the left. 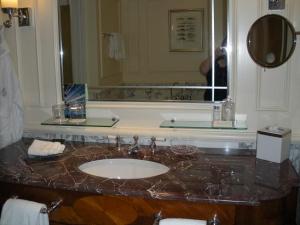 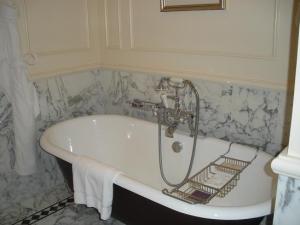 As you can see the bathroom is beautifully decorated in mostly neutral tones, as you enter the room there was a shower cubicle to the left facing the sink unit and to the right is a seperated WC. I found the toiletries to be excellent and I was impressed by the range of sundry items that were provided for our use.

The bedroom is large, comfortable and both this room and the bathroom look to the grounds at the front of the hotel (view picture below) The bed is soft and much larger than the king size we have at home but it doesn’t have the anti roll together that we have in our own bed so while it is nice to snuggle in such a comfy bed, it’s also good to have your own space, especailly when there is so much of it! The TV was situated in the armoire which also housed the room safe, a DVD player and in the lower cupboards were the chilled and ambient mini bar items for the room. The first thing we did however was to make a nice cup of coffee after the drive up there and we were pleasantly surprised to find a fruit plate and bottle of water had been left for us along with a note of welcome. 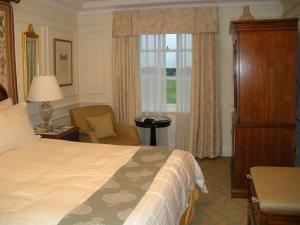 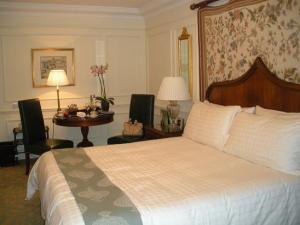 We went out of the hotel for dinner each night and each time we returned it was raining quite heavily and so we took advantage of the valet parking for the rest of our stay.

In the morning we rose, got showered and dressed for the day and made our way down to Seasons (the hotels fine dining restaurant) where breakfast was being served. We were offered newspapers on arrival and shown directly to a table where a waiter approached offering fruit juices, coffee and water. It was explained to us about the buffet arrangements and to just help ourselves to the items on offer and we both decided to take advantage of it being a holiday and so had a (nearly) full english, well, being a buffet we got to pick out the bits we liked the most and enjoy those while not having to take any of the bits we didn’t. There was also a range of cereals and bakery items on offer as well as many different fruits so everyone would be very well catered for no matter their diet

After breakfast we wandered back up to our room and collected the vouchers and schedule and made our way over to the spa. 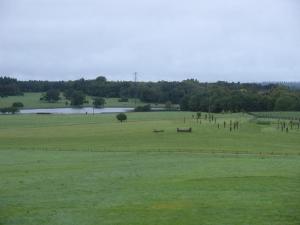 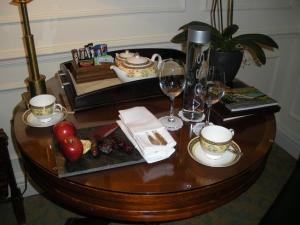 When we entered the spa area we were greeted warmly and booked in, we were given some forms to fill in about medical conditions so the day and treatments could be better tailored to our needs we were then split up, Dave going throught to the male area and myself being taken through the female way. I was shown around, the changing room is very well appointed and kept clean and tidy by the staff and the relaxation area where you wait for your treatments is very welcoming and has magazines and drinks to keep you occupied if you arrive too early. After being collected and taken to my treatment room I admitted I was nervous and this was my first time in a spa, I was put at ease right away and had everything explained to me that would be happening during the morning which was a foot ritual, body massage and a facial. Before we started I was to select which products I wanted to have used on me, I was given different scents to pick between and even different coloured lighting to set the room to how I wanted to feel after it was over. I admit, before going, i never really understood why people would go to spa’s, I couldn’t get my head round being massaged for hours and not be actually doing something but now, having experienced it, I understand, once you relax and let yourself enjoy it, it free’s your mind in a way from all your stresses and strains and stops you from thinking about anything and everything and I found so much peace in it, I really did relax totally. The facial was amazing, I have very combination skin, incredibly dry at the top of my face ranging to spot prone on my chin but the facial coped really well with that and my skin even today (24 hours + later) feels wonderfully moisturised without feeling greasy.

After the morning treatments I met up again with Dave by the vitality pool and we decided to go into Cafe Sante for lunch and then a walk through the walled garden. Lunch was really tasty and the garden was lovely and peaceful to sit and enfjoy just being with each other and discussing what treatments we had both had already. We ventured back to the spa for our afternoon treatment which was a pedicure, it was strange letting someone else take care of my feet but I did enjoy it and they look much better for having it done. 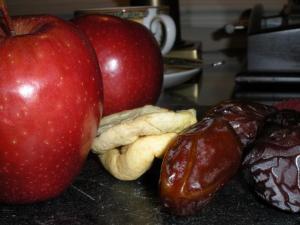 All in all, we had a wonderful time as you would expect from visiting such a well known and well respected hotel but I wouldn’t say that we would go back. The hotel has great facilities and staff but I’m sure like most of you we could find much better things to spend £1,500 on but I do understand the price tag, you’re not just paying it for the service you get but also the exclusivity of staying there which to some is worth it but to me, probably not but I will always have the happy memories of my best win to date!

Welcome to my Blog

A snapshot of my life, here I share with you the things I'm lucky enough to win and receive in the post and I have a bit of a ramble about other things that interest me or are important in my life right now.

I might also include the odd review if I get offered something or I find something I really need to share with you be it because it's fantastic or terrible!lol