I did a trade a few months ago with Ben & Jerry’s via a Fairtrade promotion they were running. I offered to send three of my friends a gift in return for some Shea butter and Black soap. I was lucky enough to have my bid chosen as the winning one and duly sent off gifts to 3 volunteers who in turn told Ben & Jerry’s that I had completed my side of the deal and my bid was then accepted as the winning one. It was a fun competition to take part in and I know a few of my friends were also lucky enough to have their bids accepted as well.

I was really pleased to win this prize as I’ve been using shea butter products for some time now and know how nice it makes my skin feel so I was naturally curious about the pure substance and the black soap, I’ll review the shea butter itself once I’ve tested it a bit longer and more fully but now onto my review of the soap. 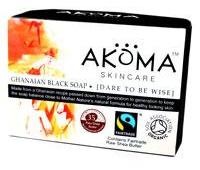 The first thing I noticed was that there is no real scent to this soap, after years of using various types this came as a big surprise to me and I became a little sceptical about if I would like it as part of soap use for me has always been the smell, it’s always been how I choose which one to buy when shopping and probably the reason for how dry my hands have become! After getting over this and discovering that black soap is not actually black but more a creamy brown colour I decided to test it out and this is where I made the biggest mistake. When you buy the soap you can normally purchase it in either 100g bars or 1k blocks, mine came as bars and I assumed that is how you use it like all soaps but it isn’t! The soap becomes very soft and tacky very quickly when wet and doesn’t dry very well even in a soap dish so I waited it out till it was dry and cut it into 4 pieces which seems to be a much better way of using the bars. The bars cut very easily with a sharp knife, they are a lot softer than they appear!

Now on to using it, it’s only this year that I have returned to bars of soap after years of using handwash. I had forgotten how good it can feel to use a bar of soap, it takes the clean hand feeling to a totally different level that liquids cannot match. Well, this soap actually goes even further than that. Within a couple of rubs of the bar you have your hands full of a rich creamy lather, as you rub it around it feels more like rubbing in a hand cream than using soap, it is an experience that I found very pleasurable and after rinsing and drying my hands I found I did not need to use a hand cream, my hands felt wonderfully moisturised, very soft and smooth. I then set about thinking of a way to test it in the shower (bath would be no problem as you can just put it back on a dish when finished with to dry) The way I came up with was to pull a piece off about the size of a small grape and I pushed this into my shower puff, this worked very well and I found I had the same results again as I did with my hands, my whole body felt wonderfully clean, moisturised and cared for. I then came up with an idea! 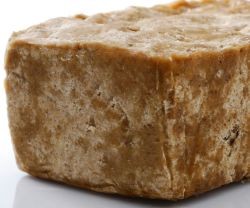 I was sure I’d read somewhere online (I’m not sure where) that black soap is good for the hair/scalp so I decided to try it out, I still had some of the piece of of soap left in the puff so, once the puff was full of the creamy foam I rubbed it into my hair, I found it wasn’t like using shampoo, there was no instant lather and to a certain extent I couldn’t feel it on my hair at all. I rinsed off and then discovered that my hair felt much different to normal. My hair is very fine so I’m used to being able to wring it out after washing but I found I couldn’t. I thought for a minute and assumed it meant my hair must have gone really greasy from the shea butter in the soap but decided to dry it and find out for sure what had changed as I could always wash it again and I am so pleased I did! My hair wasn’t feeling strange due to greasyness, it was streange due to it being much much thicker and fuller than it has been since the disasterous bleaching attempt in the 80’s but this time it feels soft and silky and looks really healthy.

I love this product and can see myself using it for years to come, all I will say to you is, if you decide to try it, please make sure you get real African black soap and not one of the cheap imitations that are being mass produced in Europe and America!

Welcome to my Blog

A snapshot of my life, here I share with you the things I'm lucky enough to win and receive in the post and I have a bit of a ramble about other things that interest me or are important in my life right now.

I might also include the odd review if I get offered something or I find something I really need to share with you be it because it's fantastic or terrible!lol